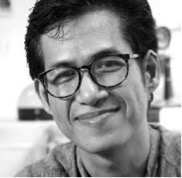 Arnont Nongyao is a contemporary artist of Chiang Mai, who is known for his work with different medias such as sound, video, installation, and public art.

His mainly work is focus on vibration through experimental projects.  He produces his artworks in a quiet space, a peaceful studio shared with other artists, situated near Chiang Mai University.  In an atmosphere of creativity and imagination, this Ali Baba’s cave is full of objects and paintings.

After his art graduation in Chiang Mai University, he knew his involvement on the art scene was not only a choice but also his destiny.  His artworks are the outcome of his Thai society’s observation.

When Arnont said that “I don’t talk so much, I like to listen every sound and everything that people say” it means, that his inspiration comes from his environment as, for instance, the energy and the dynamism of the local market, the sound of the Chiang Mai’s streets, the smell of the Thai food. His inspiration is created by his daily life. He uses the same tool as a sociologist, listening and hearing, in order to create a work which reflect Thai society.

For him, art is a useful tool; not only to express his own feeling but mostly to let the local people express themselves. Through his artworks, his purpose is to create a link between people, a space of freedom where they can express their feelings and their frustrations without any fears. That’s why, he considers that his work is complete only when people interact with it, and truly think about the meaning of his message. His artwork is also a way to protest indirectly against the issues of the society.

He participated to the Play in the Flow’s exhibition, which took place in the Sri Prakad House in Chiang Mai from the 22nd of September to the 8th of October 2017.

This exhibition expressed the midst of change, when “people can’t accurately define or judge their owns actions.” The artists, through their arts, wanted to express how people get beyond the issues of everyday life, and how they survive in this “invisible flow”.

The theme of the exhibition coincided with the way Arnont considers the meaning of art scene. For that reason, his participation in it was thoughtful and obvious.

The artworks, showed in Play In the Flow, were created by Arnont Nongyao and Piyarat Piyapongiwiwat for their exhibition in 2014 called Transe. This videos shows the vibration on water of a Japanese propaganda song, which is nowadays, became secret. That’s why, the sound of the music was erased. However, the audience had the opportunity to “listen” the music through their imagination, by the visual aspect of the vibration on water, which draw pictures.

The artwork created an uncomfortable atmosphere for the audience: the video took place on a big screen in a dark room, full of silent. Thanks to this atmosphere, the audience is almost hypnotized by the pictures, which seem to dance on the screen by telling a story.

According to Arnont Nongyao, it was very important to use this historical song, because it transmits a message of peace. Indeed, during World War Two, when Japanese soldiers came back to their home, after they had listened this song, they didn’t want to leave to war again. As Arnont said, it is a propaganda song, but a “propaganda for peaceful”.

According to me, the power of this artwork is the fact that it can awake the imagination of the audience. For that reason, every person who watches this screen participates, through his own creativity, to the transformation of the artwork.

The next project of Arnont Nongyao will take place next month in the exhibition called “Next Nation” in Bangkok in Cartel Art Space: three short films produced by Arnont, will be showed.

Through this exhibition, the artists express a critic of the current politic of Thailand.

Arnont said:  “ because in my country we cannot protest, I like to let people make noise”. However, this time, it will be the artists who will create the noise of freedom through their arts and the audience who will listen them: art is a liberty of expression, art means freedom.

Here the link of Arnont's interview: